The image displayed on the homepage determines the color palette used across the entire site. For this reason, these images need to be high quality, expressive, and feature a range of diverse colors.

At any one time, a user can choose between up to five different images — and five different color palettes. Each user gets to choose their own image and palette, so the image and colors you see might be different from what the person next to you sees.

Images uploaded to this collection will be cropped to 1410 x 650 px. Keep the focus area of the image in the center, because the image is displayed at a slightly shorter height on shorter screens.

Any image uploaded into the Homepage Hero Images collection, or added to this collection, will automatically get a color palette when saved. The initial palette provides a good starting point, but palette will almost always require adjustment to get it looking just right, and to ensure all the colors are accessible (the color must show a green icon).

If you’d like to select different colors from the image, you can install Colorzilla on Firefox or Chrome, and use the eyedropper tool to pick out various colors. See the Colorzilla help guide below.

Once you’ve finished tweaking the colors, don’t forget to add a caption to the image. This will be displayed in the overlay that slides out from the right hand side. Again, this will be shorter on smaller screens, so it’s important to keep the caption within the space provided by the white box. If you copy and paste text into the caption, use the “Tx” button to clear formatting (even if it doesn’t look bad, it’s worth taking this step to avoid problems with the homepage).

Finally, when it’s time to reveal the new homepage image to the world, star the image to display it on the homepage. The top five starred images will be displayed. Any images that aren’t starred are grayed-out in the Homepage Hero Image manager.

You can use balloons to move stories and galleries to the top, to ensure they get priority.  However, this does not affect what order they appear on the homepage: Think Wide Open cards are displayed in random order that changes (roughly) each time the page is refreshed.

Content in the tabs at the bottom of the homepage is managed from four different groups:

Everything on the Today at Purchase tab comes from the Homepage group.

The PAC group should always have a starred upcoming event with an image for the first column. It does not fall back to anything since we’re already showing upcoming events in the second column.
The starred event is randomized: to show a particular starred event, tag the event with “featured”.
The second column shows up to 3 upcoming unstarred events, from the PAC group.
The last column shows days/times when the box office is open (PAC office hours), and a starred announcement from the PAC group (this is optional).

Click to install Colorzilla on Firefox or Chrome browser (Colorzilla does not work in Safari or Internet Explorer). 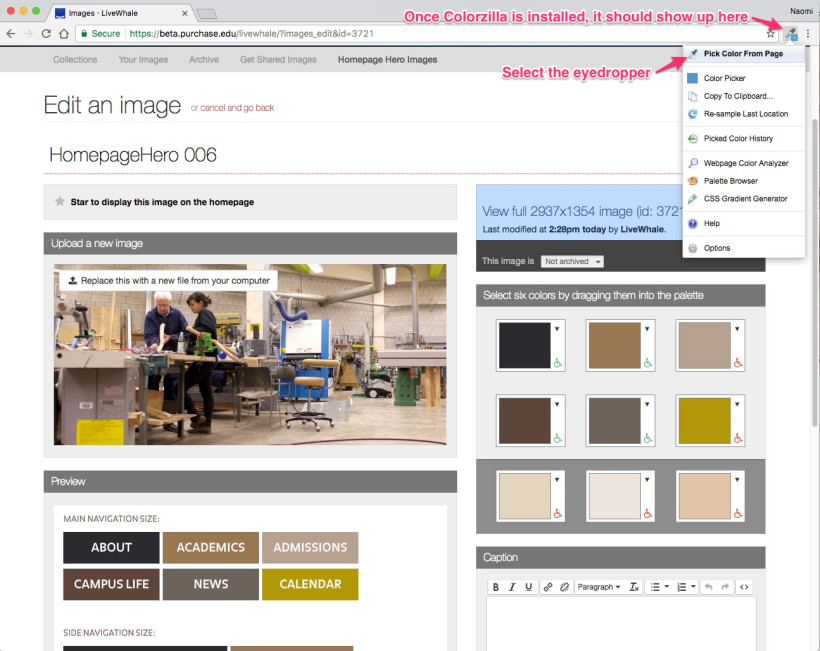 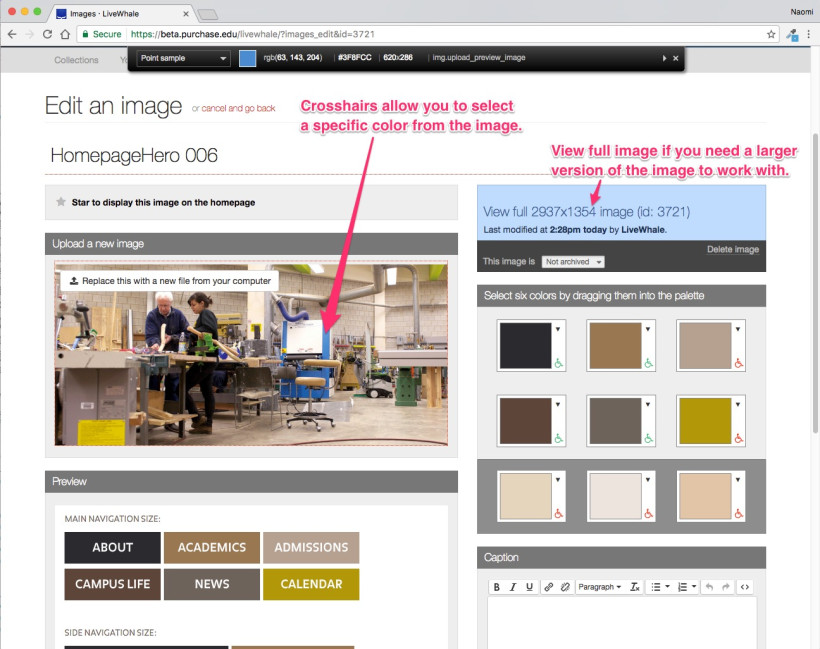 These colors will be used for color-blocks that appear behind the words that make up the main navigation that appears on every page of the site. the colors will be overlaid with white lettering - and it is critical to maintain adequate legibility and contrast.

To ensure accessible content, keep an eye on the wheelchair icon at the lower right of each of the color squares that colorzilla is proposing. If the wheelchair is green, is passes the contrast test - if it is red, it does not - and you should choose a different color. In the example shown above, the three colors being proposed within the gray bar at the bottom do not meet accessibility requirements, nor do the two in the right-hand column. 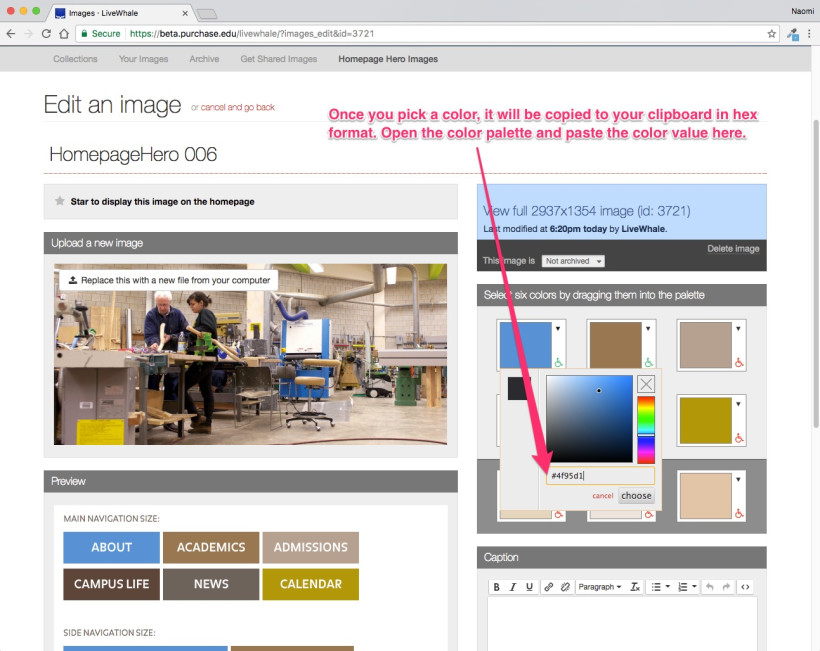 Using the Colorzilla extension to create a color palette.