Founded by Governor Nelson Rockefeller in 1967 as the “cultural gem of the SUNY system,” Purchase College has long been fertile ground for artists, explorers, and intellectuals.

He envisioned a campus where conservatory training in the visual and performing arts would reside alongside programs in the liberal arts and sciences, based on the principle that arts and scholarship are indispensable to each other and to an enlightened society.

The City Within the Country

The choice of 500 acres of rural land was initially contested and the location criticized for its liminal proximity to New York City. But Rockefeller was intent on creating a landmark campus, and invited the creative muscle to bring his dreams to fruition.

Rockefeller enlisted renowned architect Edward Larabee Barnes, whose master plan for the campus was loosely based on Thomas Jefferson’s for the University of Virginia at Charlottesville. Barnes clustered the buildings in a village center surrounded by the vast open space he left preserved. He brought together  a team of the era’s leading architects to design the individual buildings and chose the ubiquitous brown brick as a means to unify the disparate designs of Philip Johnson and John Burgee; Venturi and Rauch; Paul Rudolph; Gunner Birkerts; Norman C. Fletcher; and Gwathmey, Henderson, and Siegel.

We’ve always been dedicated to the arts, and our museum has been a point of pride from the very start. The Neuberger Museum of Art formed when Rockefeller approached financier Roy R. Neuberger to donate a portion of his significant American art collection to found a museum that would bear his name. The initial gift in 1969 and the additional objects donated over time form the Roy R. and Marie S. Neuberger Collection, nearly 900 objects that are the heart and soul of the more than 7,000 paintings, drawings, prints, photographs, sculptures, installations, and time-based work that now make up the museum’s permanent collection.

The Performing Arts Center (PAC) is another example of our dedication to the arts. A four-theatre complex that presents a full season of professional performing arts, it also provides the space for conservatory productions each semester.

Both the Neuberger and the PAC embrace education as their core mission and tie their programs to our academics as well as connect us to the surrounding community.

Purchase Through The Years

A Place in History

There’s a little American history gold tucked away on campus as well. John Thomas, one of the first white settlers here and the former owner of the land, was an early revolutionary, vehemently opposed to British rule in America. He had the great honor of giving the first public reading of the Declaration of Independence in New York State—on the steps of the courthouse in on July 11, 1776.

Less than a year later, he was seized from his bed by British Troops and imprisoned. According to some historians, he was tortured for 40 days, and he subsequently died on May 2, 1777. One central half-acre of the estate is set aside in perpetuity in his honor.  A monument to John Thomas, an obelisk, still stands today. 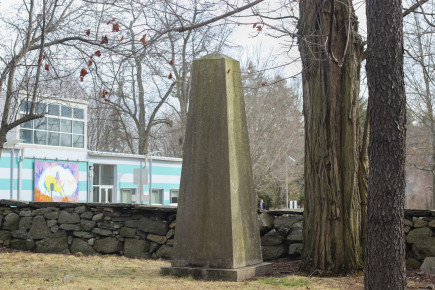 The monument to John Thomas as it stands today.