A collaboration between Professor Warren Lehrer and investigative journalist/poet Dennis J Bernstein, Five Oceans in a Teaspoon (Paper Crown Press; September 19, 2019; $35. hardcover) is a seven inch square, 300 page collection of 225 short visual poems that reads like a memoir in poems. 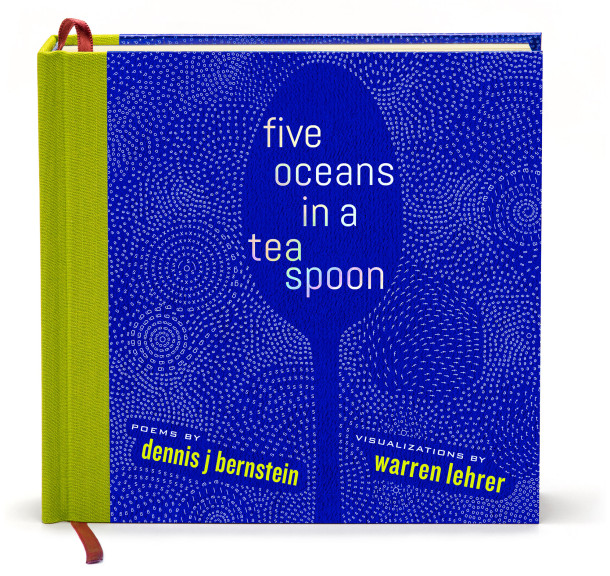 In 1979, Bernstein and Lehrer began working on a book of poems, originally titled Stretch Marks. Instead of completing that book, they leapt into writing their first play together, and over the intervening years they collaborated on three books, including French Fries, considered a classic in visual literature and expressive typography. A few years ago, they began collaborating again with a renewed focus on visual poetry, bringing together Bernstein’s words and Lehrer’s typographic visualizations.

Now, on the 40th anniversary of their original effort the two have completed Five Oceans in a Teaspoon.

Divided into eight movements/chapters, the book spans a lifetime: growing up confused by dyslexia and a parental gambling addiction; graced by pogo sticks, boxing lessons and a mother’s compassion; becoming a frontline witness to war and its aftermaths, to prison, street life, love and loss, open heart surgery, caring for aging parents and visitations from them after they’re gone. Lehrer selected the poems (out of thousands Bernstein wrote over a half century) and arranged them into the book. Professor Lehrer’s typographic compositions give form to the interior, emotional and metaphorical underpinnings of the poems—visualizing a wide range of experiences including Dyslexia, Alzheimer’s, and patterns war and relationships. Together, the writing and visuals create a new whole that engages the reader to become an active participant in the navigation, discovery, and experience of each poem. 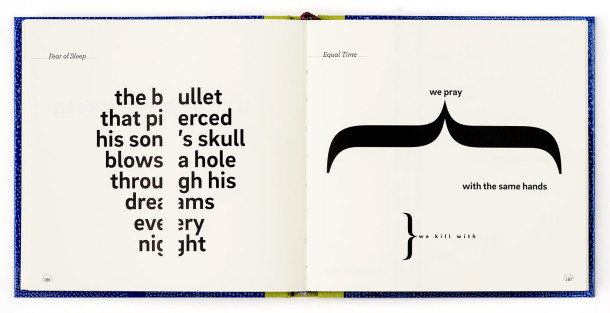 In addition to the book, Lehrer—who received the 2019 Juanita and Joseph Leff Senior Faculty Research Award from Purchase College to create videos based on the book—has made animations of select poems, visualizing them through kinetic typography and sound. The animations augment the book, can be seen and shared online, are featured in Lehrer/Bernstein’s live performance/readings and in the Five Oceans in a Teaspoon exhibition opening at City Lore Gallery in NYC on September 19 and running to November 23. Eight of the first twelve animations are available for viewing at www.fiveoceansinateaspoon.com.

Design historian Steven Heller writes in his introduction, “The gutsiness and raw emotion of the writing, revelatory appeal of the visual compositions, and brevity of the form creates an intensely moving experiential journey… Bernstein and Lehrer—the Lennon and McCartney of viz-lit—have reunited at the height of their creative powers.”

Alice Walker, Pulitzer Prize-winning poet and author of The Color Purple calls Five Oceans in a Teaspoon, “Brilliant and beautiful.”

Johanna Drucker, renown visual literature scholar and the Breslauer Professor of Bibliographical Studies at UCLA, writes, “Imagine Portnoy’s Complaint rendered into Guillaume Apollinaire’s Calligrammes and you get some idea of the surprising combination of rich recollections and graphic scoring that animate the pages of Five Oceans in a Teaspoon. In the long history of graphic word works, few, if any, have this range and repleteness.”

Bob Holman, poet, poetry activist and chronicler, and founder of the Bowery Poetry Club, writes, “Five Oceans in a Teaspoon re-envisions a poetry memoir via a textual kaleidoscope.”

Warren Lehrer is a designer and author known as a “pioneer of visual literature and design authorship.” Awards include: The Brendan Gill Prize, IPPY Outstanding Book of the Year Award, Innovative Use of Archives Award, International Book Award for Best New Fiction, three AIGA Book Awards, a Media That Matters Award, grants and fellowships from NEA, NYSCA, NYFA, Rockefeller, Ford, Greenwall Foundations. He is a 2016 Honoree of the Center for Book Arts. His work is in many collections including MoMA, Getty Museum, Georges Pompidou Centre, Tate Gallery. A frequent lecturer and performer, Lehrer is currently the Leff Distinguished Professor at Purchase College and the Chair of the Graphic Design Department, School of Art+Design. He is also a co-founder of EarSay, a non-profit arts organization in Queens, NY.

Dennis J Bernstein is a poet, investigative journalist and award-winning host/producer of Flashpoints, syndicated on public and community radio stations. Recipient of many awards and honors, including Pulse Media’s Top Global Media Figure, 2015 Pillar Award in Broadcast Journalism, Artists Embassy International Literary Cultural Award, his books include Special Ed: Voices from a Hidden Classroom, Particles of Light, and three books with Warren Lehrer including French Fries, considered a seminal work in the genre. 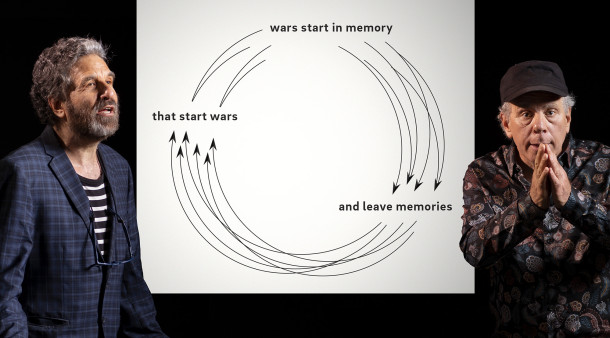