January 24, 2018
Purchase College is proud to be part of a project that has been awarded a prestigious grant honoring work in art and social justice.

The Ghana Think Tank (GTT), an arts and activism organization co-founded by Associate Professor of Art+Design Christopher Robbins, was recently awarded a grant from the John S. and James L. Knight Foundation for its project “American Riad.” The $135,000 grant is part of the Knight Arts Challenge, which funds ideas that engage and enrich Detroit through the arts.

American Riad is an innovative public art project in Detroit, which intends to help combat social isolation through the creation of a space devoted to community connection in the North End. It is a collaboration between Ghana ThinkTank, Oakland Avenue Artist Coalition, Central Detroit Christian CDC, and the North End Woodward Community Organization. Students from Purchase have participated in the project during the summers of 2016 and 2017.

“This funding will allow us to rebuild a street corner through art and culture while combating gentrification, as part of the Oakland Avenue Artist Coalition’s vision to bring back Oakland Avenue back as a vibrant hub of Black culture,” says Robbins. 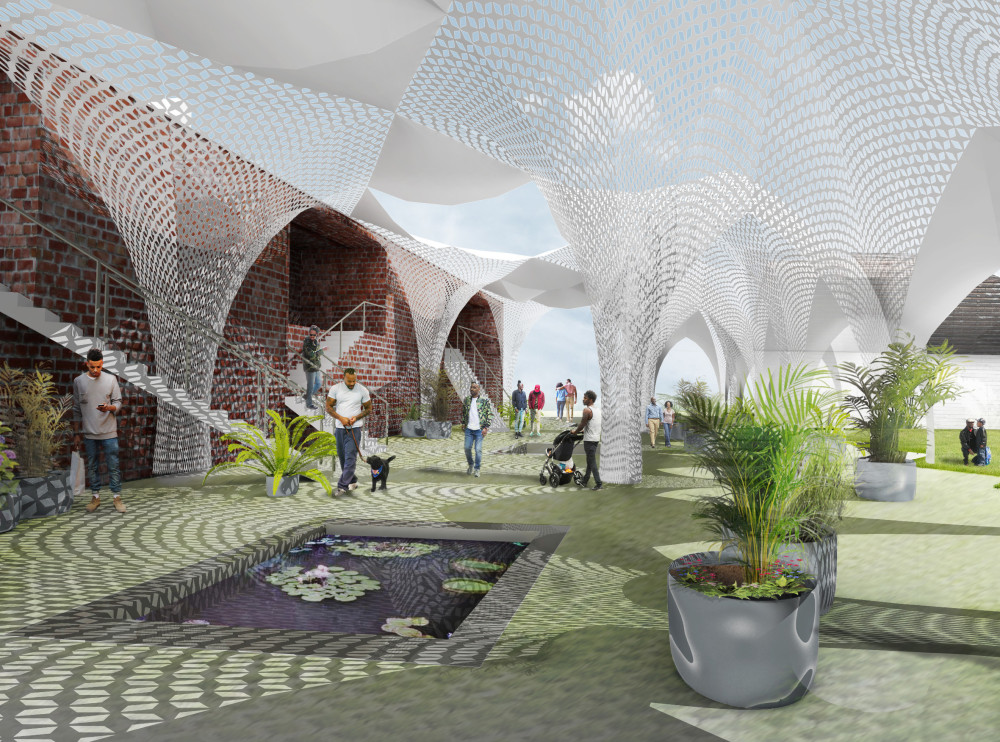 The inspiration for American Riad came in 2012, from a group of women in the Moroccan village of Tassoultante, who formed a think tank to address U.S. problems submitted by U.S. citizens. The Moroccan think tank raised the idea that the social isolation so rampant in American cities was caused by architecture, such as the single family home, and apartment complexes designed for privacy rather than community. They explained that Moroccan architecture encourages community connection, specifically the Riad, a shared housing complex around a common courtyard.

This idea took root in Detroit, when an art and architecture collaboration was formed between Oakland Avenue Artist Coalition, the North End Woodward Community Organization, and the Central Detroit Christian (CDC). Together, the groups set out in Detroit’s North End neighborhood to transform three buildings into apartments and small businesses that serve the neighborhood’s needs, while preserving the North End’s rich history.

Through a Detroit-owned land trust, the team has purchased an empty 12-unit building, an abandoned house, and the empty lot that lies between them to create eight low-income apartments and six businesses surrounding a Moroccan-inspired shared courtyard.

As a Purchase professor, Robbins immediately saw the learning and social action opportunities for his students and colleagues. He enlisted Purchase sculpture faculty Raphael Zollinger and Rachel Owens, along with several Purchase students to help turn the vision into a reality alongside their partners in Detroit and Morocco.

Various members of the SUNY community have contributed to the project including SUNY students and faculty members from various disciplines such as art, architecture, sociology, and environmental science from Purchase, Buffalo, and New Paltz.

Here on campus, students in the Advanced Digital Fabrication class taught by Raphael Zollinger, lecturer in Art+Design, prepared the components during the spring semester. Then they traveled to Detroit in the summer to install them during a study away course.

Assistant Professor of Art+Design Rachel Owens worked with the students in Detroit on planning community events while employing Theatre of the Oppressed techniques developed by Augusto Boal in the 60s, to help both their own artistic practices and to affect change on a broader level.

Steve Lam, Director of the School of Art+Design at Purchase says, “Ghana Think Tank’s work is inspired, provocative, playful, and deserves recognition. The college has had the privilege to see this initiative flourish and grow, and I see this project as a useful model for all colleges committed to the intersection of the arts and social justice.”

People on site at the American Riad Project in Detroit enjoy the prototype.
Project in Progress

The team has built two of the six steel umbrella vaults necessary to complete the Riad Canopy; held a number of skill-shares, workshops, and community events at the site (including visits from members of the Moroccan and Indonesian think tanks, and students and faculty from Purchase and Williams Colleges); and have been renovating one of the abandoned buildings.

Upcoming plans for the project include completing installation of the courtyard structures, and working closely with community organizations to meet their long term goal of using arts and culture as a driver for economic renewal within the community, while protecting against the displacement and cultural replacement caused by gentrification. The project will be complete in 2019.

“Few things bring people together like the arts, and we hope that this project will do that quite literally–by using the beautiful aesthetics of Moroccan architecture to draw people to participate in shared experiences resulting in stronger communities,” says Victoria Rogers, Vice President for Arts at Knight Foundation.

Student works on the American Riad project in Detroit