The 20th century brought about the reconsolidation of most of the original Thomas farmland into the parcel that would eventually comprise the Purchase College campus.

The critical step towards this reconsolidation was taken by the Chisholm family, which purchased various parcels of land from about 1910 to the 1930’s in order to create a large cattle and dairy farm. The Chisholm fortune was based on New England industry: the family founded the Oxford Paper Company and had diversified interests including railroads. Strathglass farm operated for nearly 50 years, until son William sold the farm in 1961 to a group of prominent Purchase residents, the Lincoln Avenue Associates, for $2.1 million. They bought the property because were concerned about the rapid development of Westchester and the commercial expansion of neighboring properties, including the airport to the northwest, and the polo grounds to the east. In 1966, the Associates sold it for $3.8 million to New York State for the purpose of creating a state university campus, part of an ambitious program of
for expanding the state’s higher education system.

Hugh Chisholm (1847-1912) first settled into the Westchester area in 1910 when he purchased property near the campus and constructed a house, which later became the High Point Hospital and later the Belle Fair housing development. In 1911 the family began the process of purchasing what would eventually be the 500 acres of land which constituted Strathglass Farm.

An aerial view of Strathglass Farm 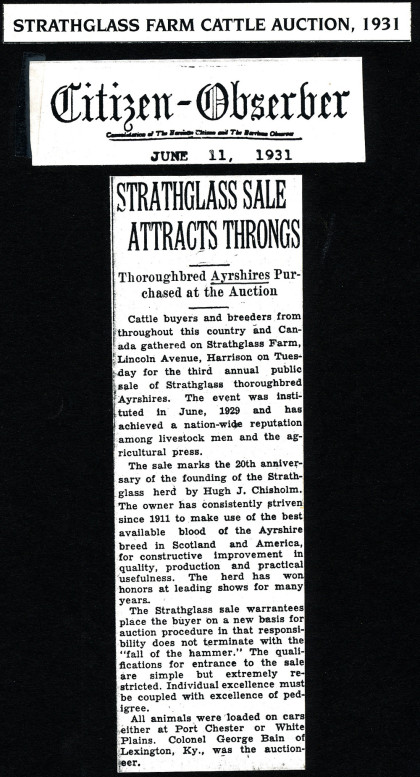 A June 11, 1931 newspaper reported throngs of cattle buyers and breeders at a Strathglass Farm Cattle Auction, looking for thoroughbred Ayrshires, which the farm was famous for. 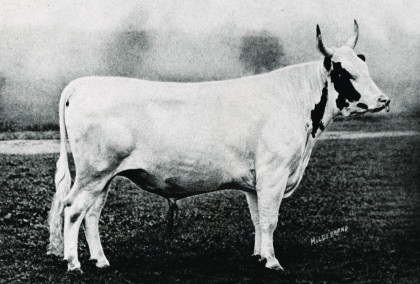 Strathglass Farm Prize-winning Ayrshire Cattle
Hugh J. Chisholm’s son Hugh took over the Westchester property and named his estate after his family’s ancestral Scottish home. He focused on making Strathglass Farm a name in the cattle breeding business. Chisholm bred 300 prize-winning Ayrshire cattle including 6-8 bulls on the farm, which operated until his death in 1959. His wife Sara raised poodles. Dairy production peaked in the 1930’s, when more than 2,000 quarts of milk were processed every day for consumption at a White Plains hospital. A staff of 25-30 people, most of whom lived in one of the three boarding houses on the estate, ran the estate, which the Chisholm’s visited a few weeks a year.