Connective Collective Exhibition Asks “What Have You Lost?”

May 07, 2021
This collaborative project joins photography with the Neuberger Museum of Art and the Center for Engagement.

The Connective Collective exhibition at the Neuberger Museum of Art incorporates work from the For Freedoms 2020 Awakening, documentation of the Wide Awakes Mobil Soup Kitchen, as well work created by Purchase students during virtual town halls in Fall 2020.

Overall, the show models ways in which For Freedoms and other artists can encourage civic participation through participatory aesthetic projects. For Freedoms is the first artist-run Super PAC, an artist-led organization that “models and increases creative civic engagement, discourse, and direct action, by working with artists and organizations to center the voices of artists in public discourse, expand what participation in a democracy looks like, and reshape conversations about politics.” For Freedoms is one of the four founding affiliated organizations of the college’s Center for Engagement.

The exhibition is a joint venture with the Neuberger Museum of Art’s Connective Collective program—a series of artists talks, projects, and workshops looking at healing, justice, and the power of listening—For Freedoms, and the college’s Center for Engagement.

What Have You Lost?

As part of the larger exhibition, three students created an installation named for the question it poses, What Have We Lost? The audio/visual exhibition presents the voices of those who chose to participate by leaving voice messages responding to the question.

The visual presentation includes a wall that resembles a bulletin board or telephone poll that holds flyers stapled to it alluding to things lost. The anonymous voice mails play on a loop surrounding the viewers with the messages of those things that were indeed lost by callers.

The piece was conceived of by juniors in photography Melissa Efrus, Morgan Williamson, and Renee Weaver as part of their class For Freedoms with Assistant Professor of Photography Eric Gottesman, named after the organization he co-founded.

According to the project description, “Voicemails will be regularly compiled and played back through a speaker within the museum space as well as outside of it. The audio responses ruminate in the void space on the lost flyers, progressively contextualizing the installation. The voicemails not only invite listening, but they disrupt the traditionally silent museum by filling the space with a variety of voices. This project promotes inclusion, empathy, reflection, dialogue, and interaction with the museum space itself. What have you lost?”

The For Freedoms Class

The students’ interventions that are part of that show are the culmination of the semester-long For Freedoms class that explores various ways art can shape the world we live in through critical imagination and civic participation.

“We talk in this class about the need to reinvent the institutions of art to expand who has access to these institutions,” says Gottesman.

In this final assignment, called “Destroy the Museum,” the class discussed with Neuberger Director Tracy Fitzpatrick, Curator Jacqueline Shilkoff, Educator Kristen Lindberg, and others the complicated and sometimes colonial history of museums and the ways in which artists have engaged in institutional critique.

Students were given a wall in the museum to “destroy” as a gesture toward dismantling the sometimes-violent history of museum practice and as a way of using the institution as a site of self-reflective critique.

Four projects resulted, including the project What Have You Lost? and also Alize Ramirez’s and Blake Soule’s project in which they decided to invite participants to write messages about self-image on mirrors and then to destroy them.

Next week, two more events will take place as part of this assignment.

What Have You Lost? 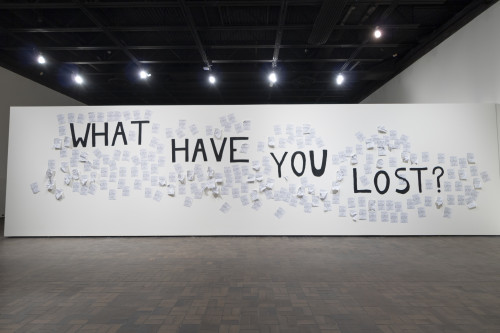 The Museum is currently open to the Purchase College campus community only.