The former soccer stand out and up-and-coming actor is on a roll.

Myles Clohessy ’16 (theatre and performance) in the thriller The Last Ferry.

He starred in an independent thriller recently released on Netflix called The Last Ferry. And in early March he began shooting in Spain for a new period drama called Glow and Darkness alongside Denise Richards and Jane Seymour. (Production has been halted temporarily due to the coronavirus pandemic). Set in medieval times, the show follows St. Francis of Assisi during the Crusades. He’s also in pre-production on a thriller set in the Scottish Highlands called The Bothy. 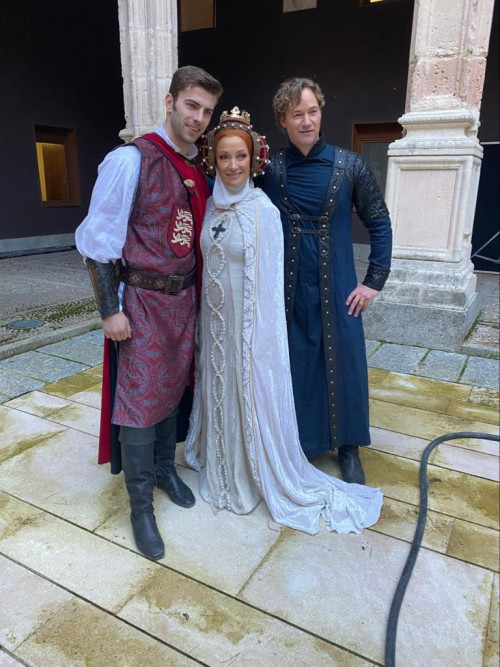 Myles Clohessy ’16 (theatre and performance) in an upcoming period drama Glow and Darkness.

As a Theatre and Performance major, he focused on acting in student and independent films, and on pursuing off-campus auditions for television, film, and commercials.

According to his senior project advisor Cobina Gillitt, Assistant Professor of Theatre and Performance, Clohessy mounted a production of Bent from start to finish for his senior project, a 1979 British play about Nazi persecution of homosexuals during the holocaust.

In the production, he performed as a Nazi SS captain. “Myles was able to create a believable and complex character who, it is implied, himself gay, while doing all he could to humiliate his prisoners who were being detained for the same ‘degeneracy’ he was keeping secret,” explains Gillitt. “In a role that could have easily fallen into caricature, Myles was able to ground his portrayal of a Nazi SS Captain in a truthful internal struggle that enhanced the play’s devastating ending.”

After graduating from Purchase, Clohessy signed with a top modeling agency, Wilhelmina, as a fitness model. Alongside working on campaigns with brands such as Calvin Klein, Nike, and Reebok, and in magazines such as Men’s Health, Men’s Fitness, and GQ, he began building his acting resume in several guest roles on network shows such as Blue Bloods, The Bold and the Beautiful, Quantico, and The Blacklist.

Clohessy started out his college career playing Division I soccer, but transferred to Purchase to focus on acting and to follow in his father’s footsteps. His father, Robert Clohessy ’81 (acting), is a seasoned actor with a impressive list of acting credits dating back to the 80s—on megahits like Hill Street Blues—to HBO’s Oz and Boardwalk Empire, Law and Order, and most recently on CBS’s hit series Blue Bloods.

President Emeritus Thomas J. Schwarz commented, “Myles was a standout actor and a standout soccer player. And it was clear from the admiration of his teammates and fellow students that he was highly regarded, highly liked and humble to boot with a great sense of humor. He deserves his success.”

Learn more about the younger Clohessy in a recent interview on CT Style.