Last spring, SUNY announced it would partner with Governor Andrew Cuomo to support recovery and rebuilding efforts in Puerto Rico and asked for student volunteers for their SUNY Stands with Puerto Rico initiative.


Two students from Purchase jumped at the chance to lend a hand. They each spent two weeks this summer in a hands-on service learning program restoring homes devastated by Hurricane Maria in September 2017.

New York City resident Azia Rodriguez ’19, who majors in media studies and communication, and Patrick Moore ’21, an acting major from Rockwell, NC, both reflect on their experiences following their return, in their own words. 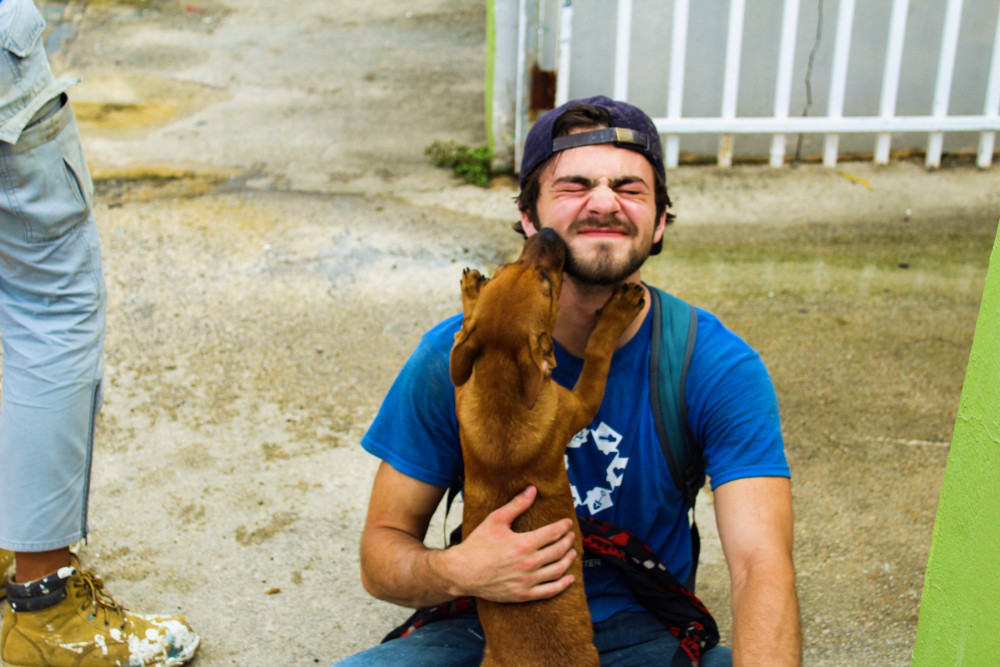 “I saw an email about an upcoming program which would consist of student involvement in Puerto Rico supported by and through the SUNY system. My immediate reaction was ‘I absolutely have to apply. Thank god someone out there is making the effort to do something.’

“I applied that night knowing if I were selected I would be highly committed to doing the most I could in two weeks. I study in the BFA acting program here at Purchase and had some very special words to go by. During one of our final days of class our acting teacher, Trazana Beverley, left us with the quote ‘to those who much is given, much is expected.’

“Much had been given to me. I am an out of state student who (albeit with some loans and tons of arrangements) has been given quite the opportunity; studying what I love in such a vibrant community. So, in short, this was my way of fulfilling that quote—or at least part of it.

“My experience is one of many words and images, of which I am more than happy to share. The second home my team was assigned to was owned by a woman named Emma. Everyday—and I’m not over exaggerating—she would ask us to stop working on her roof, come inside, and have a meal with her and her family. She invited 14 strangers into her home and fed us all daily. This woman’s home was severely damaged by a hurricane, yet she still invited us in and cooked for us.

“The situation in Puerto Rico is this: these are humans who are still without a place to call home. For the folks we met, they had a home, but the conditions were in a desperate state. If I had the opportunity to stay longer, I would do so gladly.

“Our federal government still has a lot of steps left to take in terms of repairing infrastructure there. In fact, most of the streetlights in San Juan, the capitol of Puerto Rico, were still without power. As you go deeper into the mountainous parts of the island, they have even less to count on in terms of electricity and water. It is still yet to be restored nearly a year later.

“I’m a sophomore BFA Acting major. The study of people, conditions of living, and body language all apply to my studies. In Puerto Rico I received the opportunity to study and see all three in action. People living with what they’ve got, making the most in a time of need. Kindness and heartache. It gave me a direct insight to what trauma can do to people, and how those involved continue to make the most of their situation. Even though I speak very little Spanish, I was still able to communicate through simple gestures.”

“I am Puerto Rican. So when I heard about a chance to go down there and help out my fellow Puerto Ricans, I couldn’t miss it. I am a full time student and during the time of the Hurricane was working full time at a retail job, so I never had time to physically go down and help out. From afar I sent clothes, food, and so on, but never had the chance to do hands-on work or even see in person what the hurricane had done to many.

“I saw it as an opportunity of a lifetime—being able to step into Puerto Rico, not for vacation, but going for the very first time and to learn more about their culture and to physically help people be comfortable in their own homes again.

“The experience was absolutely incredible. We had moments when we smiled, laughed, and enjoyed, but there were also more moments of sympathy, and even tears.

“I would love everyone to know about this experience as my family was affected during this hurricane and is still affected to this day. Something that really got to me was driving down the streets of Puerto Rico seeing many of the traffic lights off. There’s no source of help for these people, which is extremely dangerous. Not even that has been fixed, which is something I assumed would be the first thing fixed. I was so upset that more hasn’t been done to help them.

“I’m actually in the process of planning to create a club at Purchase College for UNICEF, which is the program that helped with this process. They travel to other places like Mexico, Texas, and so on.”

(Quotes edited for length and clarity.)