We proudly announce that Joseph A. Skrivanek, PhD, professor of chemistry, founder and director of the Baccalaureate and Beyond (Bridges) programs, has been appointed to the rank of Distinguished Service Professor by SUNY.

The Distinguished Service Professorship, SUNY’s highest academic rank, is conferred upon individuals who have achieved national or international prominence and a distinguished reputation within the individual’s chosen field for his/her professional excellence and extraordinary commitment to applying his/her scholarship to the greater good.

“I am so pleased by this recognition by SUNY for our Purchase and SUNY-wide programs. The recognition is as much for our community college partners as it is for me. We have partnered for almost twenty years and the beneficiaries have been the over 500 students served,” he says. 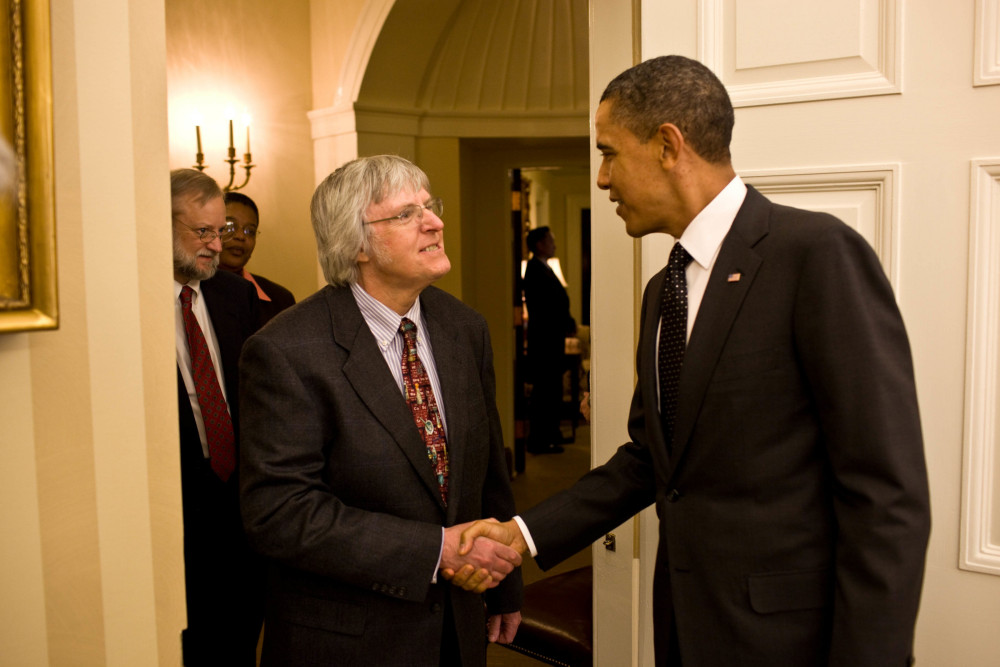 President Barack Obama and John Holdren, Director of the Office of Science and Technology Policy, welcomes winners of the Presidential Award of Excellence for Science, Mathematics and Engineering in the Oval Office, Jan. 27, 2011. (Official White House Photo by Pete Souza)

For more than 20 years, the Baccalaureate and Beyond (Bridges) programs have had a positive impact on hundreds of students who have transitioned from community colleges into four-year colleges. Because these students participated in intensive summer research/mentoring programs developed and administered by Skrivanek, their graduation rates from community college are higher than those who did not participate.

The program has a significant impact on Purchase College and SUNY’s reputation and commitment to underrepresented students in the sciences.

Beyond the laboratory and classroom, Skrivanek has been working with the SUNY Office of Diversity, Equity and Inclusion (ODEI) as provost fellow and director of the SUNY Replication Project in Albany. He has undertaken the task of replicating the Baccalaureate and Beyond program throughout the SUNY system with the goal of operating within six regions and at thirty SUNY two-year and four-year institutions.

The National Institutes of Health, National Science Foundation, PepsiCo Foundation and other corporate and private foundations have recognized the value of this program through the awarding of grants in excess of 8 million dollars.

We appreciate the quality of his work, the depth and impact of his service, and its continuing influence on  students. Skrivanek’s commitment to the principles of higher education and the scholarship of his work are distinguished and a source of pride and inspiration for us all.