August 11, 2020
Solangie Anulsa Ledesma ’20 pays tribute to the assistant principal who influenced her life as a teenager.

When the 2020 commencement ceremony was cancelled last May due to the COVID-19 pandemic, one graduate was particularly disappointed.


Not only would Solangie Anulsa Ledesma ’20 (liberal studies) miss out on crossing the stage to collect the diploma she earned 23 years after she first attended Purchase, she had hoped to invite the high school administrator who greatly influenced her life back in the 90s.

Her assistant principal Ms. Effinger not only called the Purchase admissions office on her behalf in 1997, but drove her there as well. Although Ledesma was dismissed for poor academic performance after her first year, Effinger’s influence left a lasting impression and changed the course of her life.

Still hoping to find a way to thank her publicly, Ledesma responded to a request from the founder of the popular Humans of NY Instagram account, asking people to submit their stories via email, since he could no longer approach people in person.

“I wanted to find a way to honor her and also inspire other people to believe in students like myself from disadvantaged neighborhoods,” she says. “I also wanted to show people that there are so many ways you can turn a mistake into a lesson that makes you stronger.” 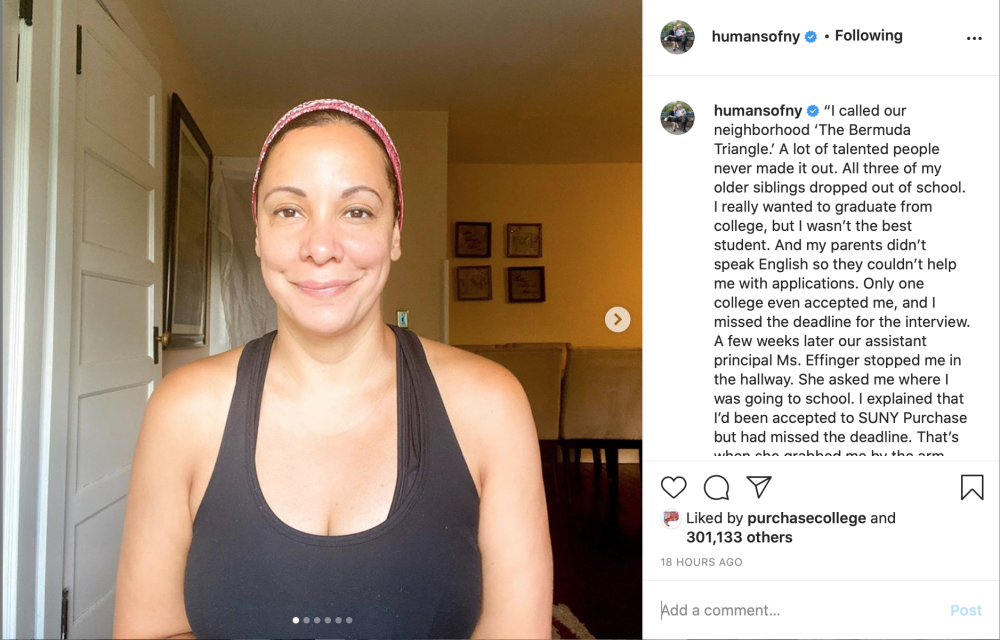 Ledesma is a passionate storyteller who routinely shares her own to inspire others. About five years after she was dismissed from Purchase, she reached out to Paul Nicholson, director of special programs, to ask if she could speak to new EOP (Educational Opportunity Program) students.

“I asked him if I could come speak to the incoming freshmen about my experience, how it affected me and how I could have made better choices,” she says, adding, “Paul was shocked. He told me only alumni come back. No one who didn’t finish ever came back to speak with the students.”

She continues, “I told him I thought it was a different perspective that may have an impact as well. I thought if other students learned from my mistakes, they could make better choices in their lives. And I learned that there is power in telling your story.”

Years later, she’s still speaking to new EOP students. “There is always a line of students wanting to talk with me after I speak. Some have been in tears. They tell me how much they needed to hear my story. Some say some family members have given them similar advice, but something about the way I shared my story resonated and inspired them.”

After a couple years of returning to speak with the EOP students, Mary Garcia, her EOP counselor, invited Ledesma to continue her studies. “Mary invited me to come back so that I could finish my degree and change the end of my story.”

Ledesma returned to Purchase as a student in 2015, taking classes at night to complete her degree. “It seems surreal. As a full-time mom of kids who played travel sports, full-time wife, and full-time manager, I’m not sure how I got it done,” she says.

She shares some wisdom for those who might want to finish their own degrees. “My advice is, life is short. There is nothing more meaningful than doing everything in your power to pursue your dreams. You don’t want to look back and have regrets. Proceed and be bold with it, because fear is a liar.”

“I called our neighborhood ‘The Bermuda Triangle.’ A lot of talented people never made it out. All three of my older siblings dropped out of school. I really wanted to graduate from college, but I wasn’t the best student.

And my parents didn’t speak English so they couldn’t help me with applications. Only one college even accepted me, and I missed the deadline for the interview.

A few weeks later our assistant principal Ms. Effinger stopped me in the hallway. She asked me where I was going to school. I explained that I’d been accepted to SUNY Purchase but had missed the deadline.

That’s when she grabbed me by the arm and said: ‘Come to my office.’ She called the admissions office and asked them to give me another opportunity. But she didn’t stop there.

She asked my mom for permission to let me sleep at her house. Then the next morning she drove me to SUNY Purchase. The interviewer said that I must be special if my principal would go through all that effort, and I ended up getting accepted.

But the story didn’t end well. I just wasn’t ready. And after a year, my GPA fell so low that I was dismissed. I felt horrible.

I asked the school if I could come speak to new students—and inspire them to make better choices than I did. I still do that today.

But I felt most badly about Ms. Effinger. I never spoke to her again. I couldn’t face her. This woman had gone out of her way to do something for me, and I’d ruined it. But she still changed my life.

Even though I didn’t graduate, I never moved back to Harlem. I ended up finding a good job at a wholesale center, and my children were given opportunities that I never had.

A few years ago I enrolled in night courses at SUNY Purchase. My boss couldn’t understand why I was going back to school, but I was carrying such a huge burden. I felt like I owed something to Ms. Effinger.

I finally graduated this year, and I found her on Facebook. I gave her a call. I told her everything that happened over the years.