Purchase College and its Office of International Programs and Services host the second annual (T)HERE Festival, dedicated to opening a space for dialogue between people and cultures from around the world.

(T)HERE: A Global Festival of Arts, Culture & Ideas will focus on Haiti. The festival will present lectures, performances, film screenings, and art at various venues across campus including The Performing Arts Center and the Neuberger Museum of Art.

“An nou pale Ayiti, or ‘let’s talk Haiti’ in Creole, is the guiding phrase of this year’s global festival. It’s an invitation to listen, to participate in a dialogue without presuming answers or conclusions, and to craft new narratives. It honors the artists, thinkers, and activists who help us connect Haiti’s audacious past to a more auspicious future for all,” says Anne Kern, dean for global strategy and international programs.

Visit our Global Festival site for a full list of events. All events are open to the public.

The keynote lecture by National Book award finalist and this year’s Durst Distinguished Chair in Literature Edwidge Danticat on Thursday, November 14. Danticat will also lead a discussion with pathbreaking contemporary Haitian journalists and media figures in the panel New Storytellers on November 15. 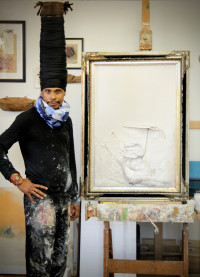 The Neuberger Museum of Art will present the exhibition Art Got Into Me: The Work of Engels the Artist. Engels, who is in residence at the museum for fall 2019, will open up his studio to visitors on November 14 and 16.

The students of the Purchase Symphony Orchestra, Purchase Jazz Combo, and the Purchase Dance Company will be joined by local high school musicians for Haiti Alive on November 15, an evening of dance and music celebrating Haitian influences in American music in The Performing Arts Center.

Also on November 15, Atlanta McIlwraith from Timberland Corporation will be joined by Timote Georges and Hugh Locke, co-founders of the Smallholder Farmers Alliance for a discussion about their partnership to transform agriculture in Haiti.

Haitian comic book artist Thony Loui will be artist in residence during the global festival. With the help of Purchase students, Loui will complete work on the first comic book featuring his latest superhero creation, Tanama, who uses her special powers to support smallholder farmers—and women smallholders in particular—in Haiti and around the world as they overcome tremendous hardships and fight off evil forces to combat climate change through tree planting. Audiences can visit the Tanama Studio, meet the artist and check on the comic book’s progress, and can also see Loui’s art on display in the Performing Arts Center during the Festival.

The festival culminates with a spirited performance of Haitian roots music and dance by Chouk Bwa at The Performing Arts Center on November 16.

Film screenings include student films from the Transnational Filmmaking Project, which brings together film students from the U.S., Benin, and Haiti for a year of collaborative filmmaking and cross-cultural conversation. A selection of short films focusing on Haitian student directors will be screened and discussed on Friday, November 15.

The festival will also feature films by award-winning artists such as filmmaker Guetty Felin and actress and director Gessica Geneus.

Food trucks and an interactive fair featuring Haitian- and American-based community engagement organizations working in Haiti will round out the festival’s offerings.