The Blue Barn Theatre and Its Purchase Roots

February 07, 2017
A striking new building sits on a corner in downtown Omaha—the new permanent home of the Blue Barn Theatre.

With a devoted following and a strong reputation for presenting an eclectic mix of thought-provoking new and contemporary theatre for 27 years, the Blue Barn is truly a house that Purchase built.

The Blue Barn formed in 1989 when Kevin Lawler ’88 (acting) was visiting Omaha shortly after graduation and the Bemis Center for Contemporary Art offered him free space in which to produce theatre. He convinced fellow alumni from his acting company, Hughston Walkinshaw and Nils Haaland, to join him, and Susan Clement-Toberer followed the next year.

Other alumni have been involved along the way, including actors Kim Gambino ’88, Bill Sage ’88, and Rachel Hauben Combs ’91; and Michelle Zacharia ’89 (visual arts) who helped design scenery. Actress Edie Falco ’86 once came out to support a Blue Barn fundraiser.

The team developed their theatrical voice that was always deeply rooted in their collective Purchase experience—the aesthetic and the training learned here form Blue Barn’s foundation. “Still to this day, we go back and use things we learned—that training and creative process are just part of our structure, our bones, our skeleton,” says Clement-Toberer.

In various makeshift spaces over the next two decades, they built a following of progressive theatre lovers and carved a niche for themselves. “In the early days, we would do performances for one or two people. We progressed to an audience that was progressive in their desire for work that was not mainstream—not that there’s anything wrong with mainstream—but different, unique, thought-provoking; an off-off-Broadway-style theatre,” she says.

Even the name was born at Purchase. According to Clement-Toberer, Haaland, who’s Norwegian, came unprepared to a voice class with the late Chuck Jones, former professor and renowned voice coach. Haaland proceeded to invent a monologue spontaneously about Sven in the barn, and when questioned about the work, he replied to Jones it was called the “Blue Barn” play.

“So we joke that we’re going to ‘Blue-Barn it,’ meaning we’re going to pull it out of our you-know-what, but it’s going to be really, really amazing,” she says laughing.

Leader for the Long Term

They each took turns at the helm, but in 2002, Clement-Toberer took over as artistic director and remains in the position today. “That’s always been one of our stipulations. No matter who’s at the helm, they have to be Purchase-trained, because the aesthetic and dialogue and communication is something that has been a driving force for us,” she explains.

Under her leadership, Blue Barn built their financial footing to match the strength of their artistic one, and following the generous donation of a lot on the corner of Pacific and Tenth Streets, she began the process of designing and building the theatre’s permanent home.

The new Blue Barn Theatre opened for its first show in September after 2 1/2 years of planning, construction, and fundraising. Like all decisions regarding the Blue Barn from its genesis, Clement-Toberer emphatically demanded the artistic vision and mission would guide the process.

“Our work was driving what we were going to build,” she says. “We wanted to be sure that our voice was strengthened through building our own space and not diluted by building something that was not the right house for us.”

The space they had rented for eleven years before the move had frustrating limitations, but also elements that rendered an intimate theatre experience they hoped to retain. For example, the new design raised the ceilings from 8 to 16 feet, but added only ten more seats to total 96. (Read more about the theatre’s architecture here.)

However, there’s one added feature that will allow artistic freedom like never before: the upstage doors open onto an outdoor performance space and a green space beyond that. “The sky is the limit as far as artistic vision,” says Clement-Toberer.

With a mission “to provoke thought, emotion, action, and change through contemporary and new works,” Clement-Toberer believes the Blue Barn is positioned to be the regional professional theatre in Omaha. “People drive from all over the Midwest now to see our work because they’ve heard of us,” she says.

It’s our aesthetic training that made a stand-alone theatre in Omaha, Nebraska that is unlike any in the country,” she explains. “We went from doing shows for one or two people to having our own space that sells out like gangbusters every night of every show. People love our voice and it started at Purchase.” 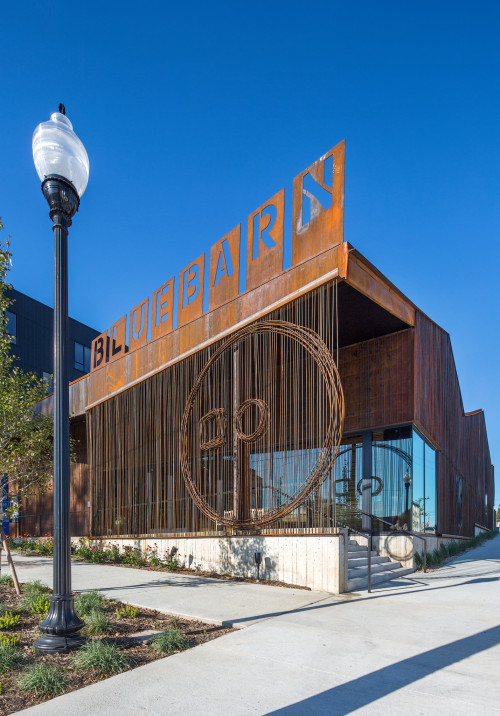