Forty-five years after it was first on view, the muted color and subtle power of Cleve Gray’s arresting mural still offers a meaningful space for reflection, meditation, and renewal. 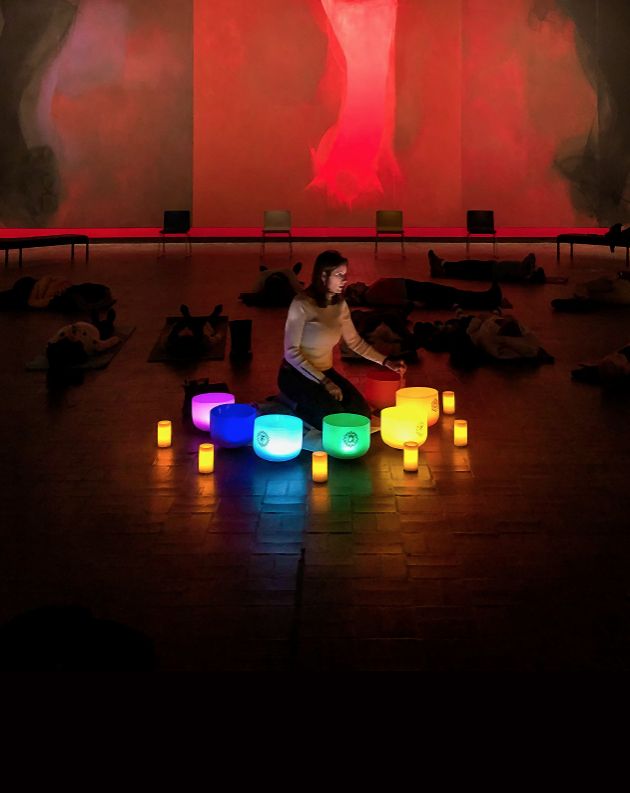 It’s the middle of finals week in the busy month of December and more than 30 students, staff, and members of the community gather in the Neuberger Museum of Art’s expansive Theatre Gallery for a yoga nidra workshop. Yoga nidra is an ancient practice of relaxing the mind and body into a state of yogic sleep.

Sitting on mats facing the four walls featuring Threnody, the dramatic paintings by Cleve Gray commissioned for the Museum’s opening, local instructor Jenelle Berger offers a guided meditation accompanied by a sound bath from crystal singing bowls lit in the colors of the seven chakras. The artist would have likely been pleased.

The notion of commissioning a site-specific installation for the Neuberger Museum of Art’s Theatre Gallery was the brainchild of its first director, Bryan Robertson. He intended the Cleve Gray project to be the pilot for three or four similar projects, but no others ever came to fruition. It’s hard to believe anyone else could have surpassed what Gray accomplished in capturing the union of a time, place, and space as he did with Threnody.

Gray (1918–2004) conceived of Threnody during the years 1972 and 1973, amid the brewing Watergate scandal and the final years of U.S. involvement in the Vietnam War. While carefully considering both the space’s scale and architecture with the weight of the moment, he planned and completed his work that went on view for the first time in 1974, when the building converted from classroom space to a museum open to the public.

Fourteen paintings, executed in situ on 28 panels for ease of storage, filled the walls of the 96 x 68 x 22 foot gallery. The word threnody is a musical term meaning “a lament for the dead.” The abstract vertical figures on colorful backgrounds were meant to honor the dead on both sides of the Vietnam War. Gray compared the gallery’s layout to a cathedral, with a single red figure serving as the apse to represent hope.

According to the plan, Threnody would be reinstalled every four years so that any student who attended Purchase would have the opportunity to experience the heroic paintings. The artist imagined students would use the space for reflection.

“I have hoped that the students of the College at Purchase, whose minds (like those of all students) are crammed with imposed knowledge, could enter this room and possess themselves of their own thoughts, could react to the paintings as an environment for meditation, where there could be both influx and efflux,” wrote the artist in 1975.

For many students here in the ’70s through to today, the space has done just that.

The Museum was the first building on campus completed, so the 150 students who entered Purchase as freshmen in the fall of 1972 had classes throughout the space. Its basement held the library and the bookstore.

Those students had the unique perspective of seeing the Theatre Gallery transform. Bob Kahan ’79 (social psychology), a member of the first freshmen class, remembers a “touchy feely” orientation exercise called Intermix taking place there. “A year later, there was art. It turned into a very contemplative, very ethereal room that a lot of us appreciated,” he says.

He recalls watching Gray at work in the gallery, spreading paint on the massive canvases with push brooms while he listened to the Watergate hearings on the radio. An undertaking on the scale of Threnody is rare among colleges or universities, particularly at public ones. But its audacity was perfectly in tune with the innovative nature of Purchase at the time. 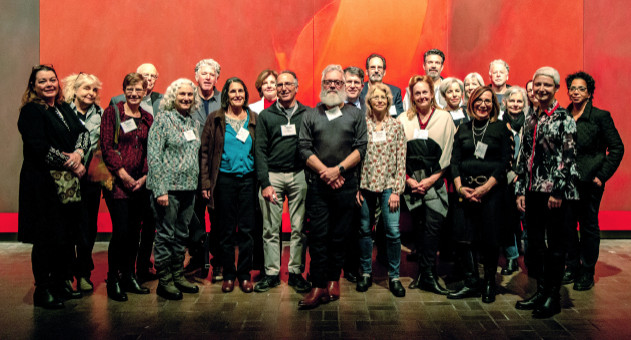 The Pioneers of Purchase

Purchase in the ’70s was progressive and experimental—no grades, only narrative reports, with semesters alternating between 12-week and four-week blocks to promote independent study. And the students it attracted tended toward the edgier and experimental themselves.

“The risk-takers were the ones being admitted,” says Kahan. “They knew we could take care of ourselves,” amid massive construction, a college still in formation, and a temporary housing reassignment at SUNY Maritime in the Bronx until the first dorm was complete in February. They rode buses to campus each day. Kahan, now retired, formerly served as the editor for DC Comics.

David Fleisher ’75 (political science) remembers walking through the campus’ infamous mud with kerosene smudge pots lighting the way. He also recalls how everything was new. “Everything we did was the first, so it was a real pioneer spirit. And a lot of fun,” he says. Fleisher graduated early and took a job as a security guard on campus based in the Museum. “I used to wander the building at night. I saw it from a lot of different perspectives. I met the artist [Cleve Gray] at the time. We all marveled at the exhibition. It was breathtaking.” Fleisher now practices law and serves on the Purchase College Foundation Board of Trustees. (And he married classmate Melissa Krantz ’76, whom he met on the first day of school.)

Another trailblazer, Jane (Shyman) Bailey ’76 (visual arts) considered herself a rebel as a teen. Sitting in the gallery recently, she recalls how the museum was one of the few buildings on campus that was complete back then. “Was it a sanctuary? Yes, because there were very few places on campus that were finished, where there wasn’t conflict,” she says. “It was a well-used room by many people.” (Bailey also met her spouse, Bill Bailey ’76 (visual arts) during that time.) Bailey is retired from a 30-year career in the White Plains School district as a technology coordinator, where she established art and music labs for middle and high school students, among other things.

And for Catherine Rutgers ’76 (culture and society), the creative influence of Threnody was lasting. “When it was completely finished, I literally would sit there for hours. It’s immediately beautiful and over time the power just intensifies. It inspired me to keep doing my own work and to prompt creativity in and of itself.” Rutgers works in publishing as a researcher, writer, and editor, and is working on turning her senior thesis, which includes references to Threnody, into a book. 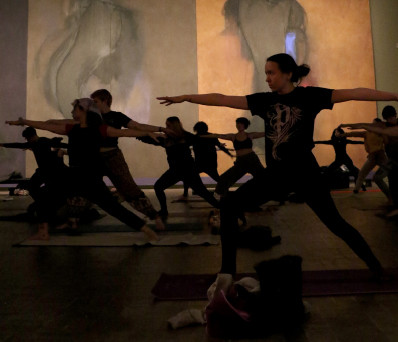 Threnody has been on view at least seven times since its first exhibition, according to records. Concerts, dance and theatrical performances, and dramatic readings are just a few of the events that have taken place with the abstract figures as witnesses.

Laura Levine ’77 (visual arts) was in the second graduating class and remembers feeling privileged to walk by Threnody every day on her way to class. And she was one of six or seven other students who took part in a performance piece created by classmate and renowned artist Fred Wilson ’76 (visual arts). “Fred strategically placed us throughout the room. We were equally spaced in a sort of grid. He then wrapped us in white gauze. Like a conductor, he went to the head of the room and quietly directed us to twist, turn, and stretch in slow movements,” she recalls. “We were trying to emulate the shapes on the wall and the movements created a sort of pulse. I remember feeling like we helped the paintings come even more alive that day.”

This past fall, Threnody also served as the backdrop for a vinyasa yoga series taught by Jessica Pozzuoli, business manager for the Neuberger who moonlights as a yoga instructor. Hoping to give Purchase students a jump start on beginning a lifelong yoga practice, she describes the semester-long class as a yoga immersion, to connect students to both the inner self and the external world. “One of the central themes in this course is ‘community’ and learning to value each other and appreciate differences; learning how to step outside of ourselves to make real connections,” Pozzuoli explains.

For junior Elizabeth Bardwil-Lugones (biology and biochemistry), last fall was her first semester at Purchase and practicing yoga in the exhibition “elicited an emotional experience that was both uplifting and grounding.” And sophomore Jordan Levinson (theatre and performance) responded to the vastness of the space. Despite the gallery’s size, “it still feels very peaceful.” Levinson searched the work for inspiration. “Threnody makes me feel well aware of society right now, as I look for any hope that may remain.”

The Tie That Binds

Following her retirement from teaching, Bailey also turned to yoga. A few years ago, she returned to Purchase as a volunteer teaching the practice at the Wellness Center. She believes today’s students share similarities with many in Purchase’s first class like her, who didn’t necessarily “fit in” elsewhere, but found a sense of belonging here. “It’s like home in a way. It’s the energy of what was created here and the brilliance of how it was created.”

She believes visiting Threnody also compels a collective, lingering experience. “These paintings have aged just like I have. And they’ve grown just like each one of us who was here. And everyone since then who comes in the room, you leave something of your goodness here and it stays here for everybody. It’s like a renewal type of thing.” 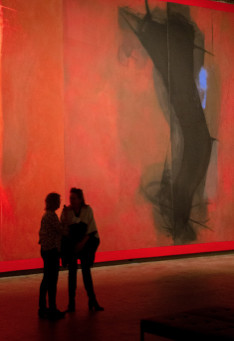 For the first time in its history, Threnody may leave the Neuberger Museum of Art. An initiative undertaken by the Loretta Howard Gallery would bring the murals to the Cathedral of St. John the Divine in New York City in 2021.

Tracy Fitzpatrick, director of the Neuberger Museum of Art, revels in the idea of bringing Threnody to a larger audience.

Threnody is one of the most special objects in our collection. It continues to have an impact on viewers almost half a century after it was first exhibited. In many ways, we are facing similar issues relating to war and the loss of innocent lives, in addition to the many other situations we have to confront here in the United States, such as gun violence.”