On March 5, the Humanities Theatre was filled to capacity with students, faculty, and community members excited to hear from two of today’s most beloved literary figures.

Michael Chabon, who has been a frequent and engaging lecturer on campus this year, is the best-selling and Pulitzer Prize-winning author of many books, including Wonder Boys, The Amazing Adventures of Kavalier & Clay, and The Yiddish Policemen’s Union.

Neil Gaiman is the award-winning author of novels, novellas, short stories, comics, and more, including American Gods, which won both the Hugo and Nebula Awards and has been adapted into a Starz television series.

The pair chatted amiably about their creative influences, their writing processes, the late Ursula Le Guin, and the challenges of adapting books into television, among other topics.

The evening ended with a lively Q&A session full of great advice for young writers.

For his part, Gaiman suggested, “Write. You don’t expect to be a heart surgeon without practicing, do you?” And added, “Keep going…You can write a lot of tosh and go back and edit it later….You can’t edit a blank page.”

Gaiman recommended that writers start with short stories, then write novels. Of utmost importance was to finish something. “You learn more from finishing one project” than from starting a dozen and then putting them aside, he explained.

His other advice was to, “Read. Read everything.” Gaiman stressed the importance of reading widely, both within the genre they want to write, as well as outside the genre, including non-fiction, which he stated was a terrific place to find inspiration for books.

After thunderous applause, Gaiman and Chabon greeted their fans and signed books. 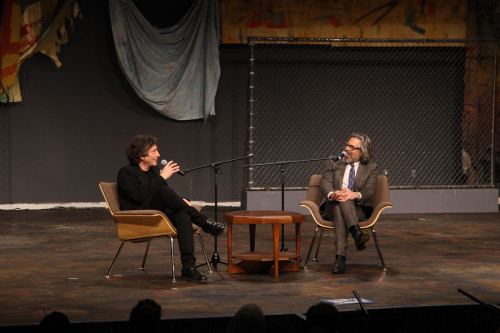 The 2017-2018 Roy and Shirley Durst Distinguished Chair in Literature Michael Chabon welcomed his longtime friend, Neil Gaiman, to campus for a wide-ranging and lively discussion.