Recent graduate and President’s Award for Public Art winner Eliza Evans MFA ’17 (visual arts) was a non-traditional student, in more ways than one.

Evans, a researcher turned artist, has installed an art project on the plaza along the south side of the Library that’s steeped in science.

Transpire is a sculptural experiment using flora and time to test the limits of nature. Evans has wrapped three trees with bright white marine-grade shrinkwrap to see if they’ll survive under duress. The species chosen—Hawthorne, Crap Apple, and White Pine—are hardy for this environment.

The trees continue to draw water and nutrients from the soil, but the ability to excrete oxygen as the waste product of photosynthesis is interrupted. The stress they’ll endure is the inability to get rid of waste. Essentially, they’re unable to exhale, thus the name Transpire.

“They’re not going to thrive, but I’m more interested in survival. This is about globally, our relationship to the planet,” she explains.

A sound component will project the trees’ health. Using analog sap-flow data, which monitors water movement in the trees, passersby will hear whether or not the trees are struggling, not unlike an EKG.

Connecting to Her Past Life

Last April, Evans found inspiration in a science-based art lecture given by the researcher, writer, and editor Heather Davis. “It was fascinating,” and appealed to her previous career in science.

After studying theology as an undergrad, Evans earned her PhD in economic sociology and spent years in the research field—she worked for a think tank that helped scientists, engineers, and entrepreneurs find each other and build companies based on university research.

Looking to engage the right side of her brain after years stimulating the left, she took a “drawing 101” class at a community college and was hooked.

She surrounded herself with artists; as she grew more interested in a career practicing art, she decided to pursue an advanced degree.

Evans arrived at Purchase with only drawing, painting, and printmaking in her portfolio, but she had a strong desire to explore additional media and techniques. She was drawn to both the facilities available here and the faculty’s willingness to engage.

“I’ve had tremendous conversations with people I’ve never taken a class with. That’s how I ended up here [at installation],” she says. “They don’t care that I didn’t come with the sculpture imprimatur. I had an idea and they were willing to help me figure it out.”

From her unique perspective as both a scientist and now an artist, Evans believes both are very similar. “’What question are you asking?’ is the first creative step for both. Just like artists, scientists are trying to make sense out of chaos.”

Evans has spent most of September as an artist-in-residence at the Woodstock Byrdclyffe Guild, after which she’ll move to Brooklyn to create new work.

She views one of her greatest challenges ahead to be the art world’s perception of a non-traditional student. “People think you’re a weekender, or a dabbler. But I’m dead serious.”

Evans will continue to monitor the Transpire project and hopes nature will endure. While she has doubts about the conifer White Pine, “It’s really kind of shocking what deciduous trees can endure.”

She says time is the principle medium in this work, and time it will be that tells. 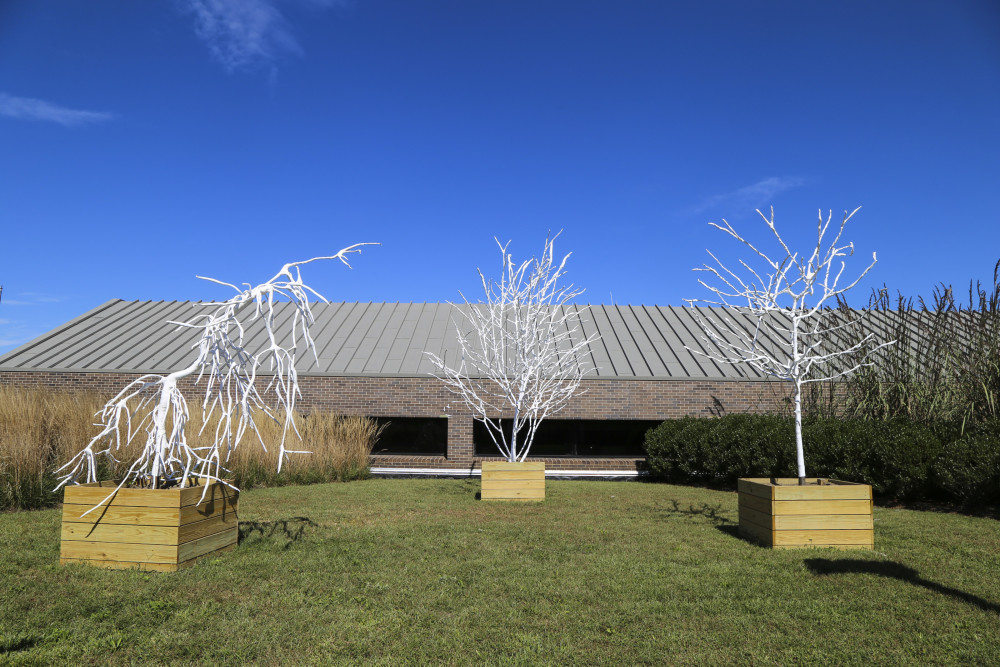 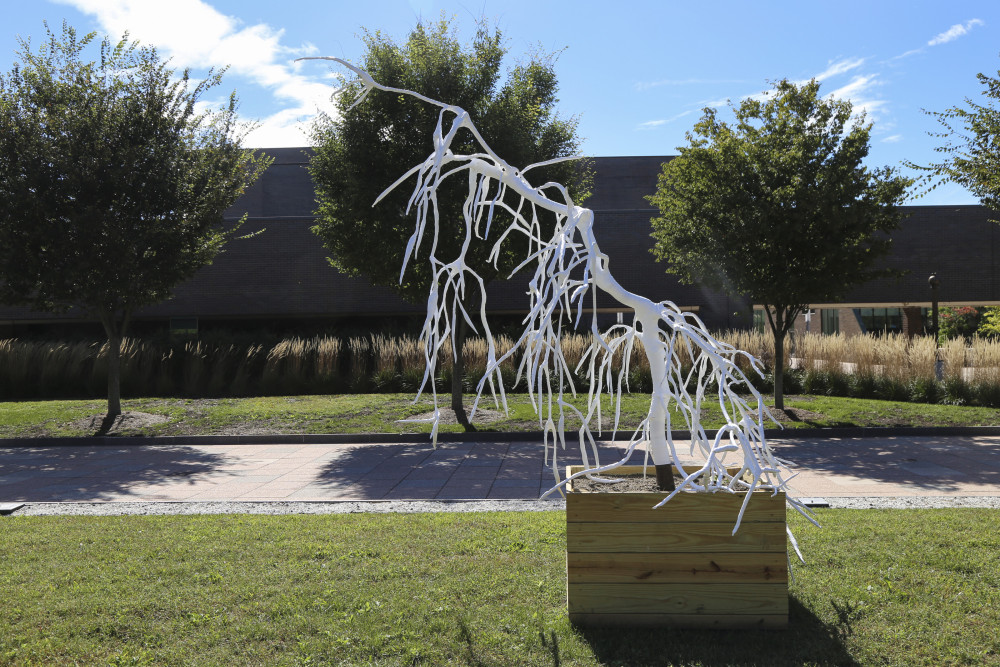 Transpire, an art installation of plastic-wrapped trees by Eliza Evans MFA ’17 (visual arts) was selected for the 2017–18 President's Award for Public Art.