A Message from the Ambassador

“I have watched with admiration as the globally-minded leadership of Purchase College, spearheaded by Provost Barry Pearson and Dean Anne Kern, have plunged into an exciting and innovative partnership with educational and cultural counterparts in Benin.  That they chose Benin makes complete sense to me.

“But as U.S. Ambassador to Benin, I know that Benin, often overshadowed by its larger neighbors, is not well known to many Americans.  All the more reason to welcome an initiative which brings this stable, hospitable west African nation into the limelight and highlights its cultural diversity and social cohesion.

“During my time in Benin, I have had the honor of meeting many of the renowned Beninese artists who will be showcased during (T)HERE: A Global Festival of Arts, Culture & Ideas. I have also met with the next generation of Beninese youth, themselves remarkably talented poets, dancers, musicians, artists and cinematographers.

“Purchase College is to be congratulated for the progress it has made in such a short time in realizing its vision of enriching exchanges between Purchase College students and their dynamic counterparts in Benin. I am confident that the two-way dialogue that Purchase College is nurturing will lead to long-lasting ties of collaboration and tap into remarkable wellsprings of inspiration and creativity.“ 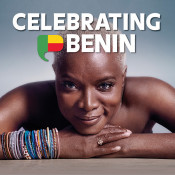